My nephew, Rob Greenfield, is a born marketer and a prodigy when it comes to marketing stunts. His degree is in aquatic science, chemistry, and biology, but he owned his own marketing company, has an enormous social media following, and has been featured in dozens of media outlets.

Rob’s primary goal is to inspire social change, not to sell toothpaste or even solar panels, but he’s also developed an impressive ability to promote himself as a brand. The key to Rob’s marketing success is his use of storytelling and stunts to grab our attention. While most of us are unlikely to take up dumpster diving, we can learn a lot from his techniques. 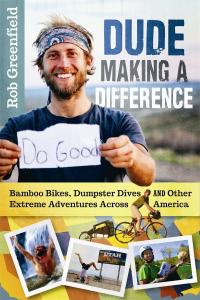 Rob’s newest venture is not a YouTube video or the latest social media craze, but an old-fashioned paperback book, titled Dude Making a Difference: Bamboo Bikes, Dumpster Dives, and Other Extreme Adventures Across America. While the book is based on his Facebook and blog posts throughout the journey, it stands alone as an enjoyable adventure story with something to make you smile on almost every page.

In between battling headwinds, hailstorms, dehydration and mosquitos, Rob created his own ecochallenges, such as not using any electricity generated by fossil fuels, eating only organic AND local food OR rescuing discarded food from dumpsters, and not showering for over 100 days (he bathed in streams).

I’m mentioned in the book several times, so I can’t pretend to be objective. As one of the biggest skeptics of his tactics, I was fearful that Rob would end up in the hospital with food poisoning or tetanus. As Rob says in the acknowledgement, “Thank you Myrna Greenfield for thinking this idea was nuts but hearing me out, helping me to make my mission clear, and then being part of the journey.”

Not only did Rob manage to complete the trip without getting arrested for trespassing, dumpster diving, or nudity (thanks in part to being a young, attractive, straight white male), but he successfully spread his message to hundreds of thousands of people through personal interactions, extensive media coverage, and high levels of social media engagement.

Over the years, I’ve had the pleasure of watching Rob evolve from a frog-loving kid to Eagle Scout to ace door-to-door textbook salesman to official do-gooder. We’ve had many discussions/arguments about effective marketing.  I even profiled his Facebook techniques on my website.

The key to Rob’s success lies in the crafting and execution of his stunts, not his willingness to endure extreme physical hardships.

Here are some observations I’ve made about Rob’s approach that you might be able to apply to your marketing campaigns.

1) Link your concept to a common dream.

Not everyone fancies cycling the entire state of Iowa while standing up on pedals without a bicycle seat, most Americans dream of traveling across the US at least once in their lives. And almost everyone has ridden a bicycle. So however wacky your concept is, try to link it to a fantasy that people can relate to.

If Rob had just flown from one city to another giving lectures about climate change, his trip wouldn’t have resonated with so many people.

Storytelling is the latest marketing craze. Stories are much more effective at drawing people in than listing the features of your product or detailing why the planet is doomed. Climate change is too abstract for most of us to care about. Stories are a great way to get someone to laugh, cry, or feel something about your brand or cause. And journalists love pre-made stories with great visuals. So tell us a story about the people involved with your product, brand, or cause: who created or started it, how they got the inspiration, or the challenges they overcame.

By being the “Dude Making a Difference,” Rob wasn’t just spouting facts about sustainability (although he does do a fair amount of that), he was the living embodiment of the points he was trying to make. The “hero’s journey” Rob made had a definite beginning, middle and end. His lyrical descriptions of the sights, sounds, and feelings he experienced make you feel like you’re riding along with him, pedal by pedal. Journalists responded because it was so easy to turn his story into a quick article or segment.

Having compelling photos, videos, infographics or artwork is essential to successful social media marketing. Images make it so much easier to tell your story. And studies show thatsocial media posts with images are far more likely to be shared than posts without visuals.

Rob originally planned to make a documentary about the trip, so he recruited a great photographer and fellow cyclist to make the journey with him. While Brent Martin and Rob parted ways before the end, Brent took some outstanding photos along the way. (All photos in this post are by Brent Martin unless otherwise indicated.) As you can see from the images here, quite a few of the shots are elaborately posed. By posting to his blog, Facebook and other social media almost every day, documenting his stunts, and giving us provocative pictures, Rob built a huge social media following on his trip.

Statistics can be deadly dull, but when used to convey scope or to back up a point, they can be incredibly convincing. Providing measurements or exact numbers can make abstract concepts more tangible.

Rob carried a solar-powered laptop and cell phone with him and recorded voice memos to use as a memory aid when blogging and posting. He recorded hundreds of details, from the number of daily miles he traveled and the routes he took to the weather throughout the day. He noted the quantity and specific types of foods he rescued from dumpsters (such as a still-warm pizza in a box or a tub of still-frozen ice cream). He also kept track of every ounce of garbage or recycled materials that he used on the trip (and kept any garbage he’d collected until the end of the trip). In addition, he documented the few times that he broke his own rules as far as using electric outlets, drinking water from a tap, etc. This level of detail and accountability makes Rob’s claims more credible.

Americans tend to be very skeptical of corporate or organizational claims about how great your product is or how much your organization is helping a community. Acknowledging mistakes, difficulties, and setbacks openly and promptly makes people more likely to relate to you and forgive the things you’ve done wrong.

Despite Rob’s high level of fitness, tolerance for discomfort, and commitment, he experienced a lot of rough moments on the trip. He’s candid about the numerous times when he felt sore, overwhelmed, or lonely. Frankly, those confessions make the book much more interesting and relatable.

6)    Be provocative and give people a way to get involved.

The average person is exposed to as many as 5,000 marketing messages per day. With so much stimuli competing for our attention, it’s hard to attract anyone’s eyeballs.  And even if you do get their attention, you’re unlikely to hold it for long. Experiential marketing, or getting people to interact with your brand, is a powerful way to have a memorable impact. Once someone has seen, heard, tasted, touched, or smelled you or your product, they’re much less likely to forget you.

Rob has a genius for coming up with stunts and tactics with great headlines. Riding 4700 miles across the country on a bamboo bike wasn’t buzzworthy enough in itself, according to Rob. He came up with concepts like “Stand Up for Sustainability.” where he removed his bike seat and pedalled 350 miles across Iowa standing up. Rob asked his Facebook fans to pledge a small amount for each mile; he donated the funds to 1 Percent for the Planet, one of his trip sponsors He also organized group dumpster dives, so people could witness how much food is wasted, and arranged the recovered food into eye-catching images that just begged to be shared on social media. In addition, he asked people to help him make and plant seed bombs(little clay balls containing wildflower seeds and soil that can be planted anywhere).

If your fans and followers are used to a continuous flow of stimulating content, you have to keep providing something of that high caliber to share. Rob’s stunts enable him to grab a lot of traditional and social media attention, but he must continually feed the beast in order to maintain the spotlight. Rob has made himself a hard act to follow.

With a little thought and creativity, you can find a stunt or tactic that authentically communicates who you are and what you stand for. For example, my client, al FreshCo, pictured to the right, delivers her farm-to-table meal kits via tricycle, an environmentally sound approach that also attracts attention for her business.

Like Rob, owner Laurel Valchuis lives the values of her brand. Can you say the same for your business?