Home > Branding > How to Use the Power of Symbols

Who would have thought that a pink hat could become a symbol of resistance?

Symbols are one of the most effective ways that you can build your brand, convey a concept, or launch a campaign.

A symbol can be a visual image, gesture, object, or idea that represents something other than itself. Merriam Webster describes a symbol as a “visible sign of something invisible.”

There are all kinds of symbols, from pictographs and emojis to flags, hand signs and status symbols. While words are also symbols, they’re not as effective as visuals, because our brains process images 60,000 times faster than text. Also, visuals are more likely to trigger emotions, because images and emotions are processed in the same area of your brain.

A visual symbol can be a shortcut to creating the associations that you want people to have. Like brands, however, symbols acquire meaning from how they’re used and perceived. The person who creates the original image or thing often doesn’t plan or expect it to become a symbol. Planning and creativity can get a symbol started, but it takes some serendipity for it to take off.

Here are a few examples of how symbols can help you promote your company or campaign.

Use Symbols to Promote Your Campaign

One of the most effective things that the organizers of the Women’s March on Washington and its sister marches did was to encourage participants to wear “pink pussyhats.”

While I scoffed at how ugly these knitted pink caps with little kitten ears looked, they became a powerful symbol for the protest. The photos of the marches all over the word had one thing in common: A sea of pink. The pink pussyhat instantly became a universal symbol for women’s rights and resistance.

Even Saturday Night Live recognized the pink pussyhat’s symbolic power and incorporated it into a skit on the night of the march.

While the pink pussyhat is literally just a physical head covering, it quickly added new layers of meaning, as people incorporated the color, the shape, and the word pussy into other articles of clothing, signs, and images.

The hats themselves may stop being worn, but every time someone sees a photo of someone wearing the hat, the associations will be revived.

Head gear, of course, was also a potent symbol for Donald Trump’s presidential campaign. The red trucker “Make America Great Again” hat that Trump wore throughout the campaign helped position the billionaire as a regular guy. The slogan itself, a reference back to president Ronald Reagan, generated positive associations for his supporters, but the physical act of putting the hat on their heads help to reinforce his supporters’ belief that “This guy has my back.”

And, as this photo taken on the DC Metro on the way home from the Women’s March depicts, sometimes pink hats and red hat symbols both vie for attention.

Colors create atmosphere and set the tone for experiences. Most colors have well-established meanings associated with them, such as red for passion and energy, yellow for sunshine and happiness, green for nature and growth, and, purple for royalty and wealth.

But when you associate a color with a symbol, it can add additional layers of meaning. It’s no accident that Donald Trump’s hat is red and that the pussy hats are pink.

Marketing guru Seth Godin used the concept of a “purple cow” to make the case that in order to stand out in a world awash with marketing messages, you need to be remarkable. An ordinary cow is unlikely to get noticed, but a purple cow would certainly to attract attention. Similarly, a single knitted wool cap with pussy ears isn’t remarkable, but a passel of pink pussyhats are.

The most famous logos are recognizable symbols without a single word, such as Apple, Nike, and NBC. In 2011, Starbucks famously dropped the words “Starbucks” and”coffee” and moved to a symbol only design. It had already achieved global brand recognition for its mark and wanted to be known for more than coffee.

In some cases, the logotype or “wordmark” (the typeface size, shape, color, and arrangement of the words) is so distinctive and appealing that it becomes a visual symbol.  Facebook and Google have both created iconic looks made out of type.

But logos are just one type of symbol that businesses and organizations can use to build awareness and positive feelings for their brand. For example, the speech recognition company I worked for, Dragon Systems, made extensive use of the image of a red dragon to build brand awareness and loyalty.

Based on the Chinese imperial dragon, viewed as a friendly, powerful creature with the gift of speech (rather than the silent, aggressive, fire-breathing dragon of Western culture), the dragon was an apt symbol to give voice to a speech recognition company. 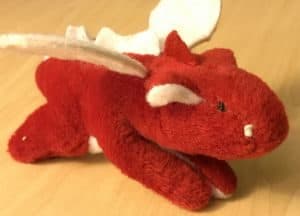 At the time when Beanie Babies were still wildly popular, Dragon Systems produced adorable plush toy dragons to give away at trade shows. They also brought a dragon mascot to the shows (always a great photo opp).

Even though few customers understood the symbolism, the fun, distinctive use of the dragon imbued the company with personality and character. This helped Dragon Systems build a loyal following.

Dragon Systems was acquired and Dragon Speech Recognition Software is now sold by Nuance. The name has survived, but not the logo. While the technology is still best in class, without the full use of the symbol, the brand has lost much of its charm.

The take home lesson: If you’re smart or lucky enough to create an effective symbol for your campaigns, cause, or company, nurture it like the valuable asset it is. Because powerful symbols are nearly as hard to come by as a purple cow.